> Meaning of logo and slogan 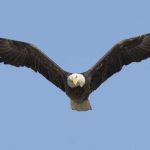 The image of wings spread out in midair to rise high. Wings are a special symbol, expressing hope and faith, strength and steadiness to overcome all challenges to develop and achieve new achievements.

The stylized TNA character is a core part of the logo, bringing the shape of an open door, thereby bringing vitality to the company.

At the same time, this is also the shaping of the lines of the building blocks, steel, reminiscent of the business industry identified as the mainstay of Thien Nam Group in the present and in the future.

The gradient blue color creates modernity for the logo, the change also means a bright dawn and a development in the future.

From the foundation of 20 years of construction and development, Thien Nam Group has now entered the stage of taking wings to raise new heights. With the inner strength, which was best prepared, Thien Nam Group chose a new logo icon bearing the image of eagle’s wings with the determination to launch its wings gliding in the air to create a good source of vitality, attracting the surrounding energy, use sharp eyes, diligently explore the potentials of sustainable development opportunities.

Moreover, the eagle’s power is not only shown in the wings but also the eagle’s mind always wants to surpass itself, the desire to survive at the highest level helps the eagle to master the sky, dare breakthrough, not afraid of difficulties and hardships.

Changing the new logo, Thien Nam Group is wearing new wings, adding new energy to rise above what has been done in the past, raising itself to a new level. Thien Nam Group pledges to always promote the potential that has been nurtured, together with a team of highly capable and acutely qualified personnel, to well exploit all potentials to bring success to customers, partners and for Thien Nam Group.